Posted on October 7, 2011 by sillymickel

I was born just before the collapse of certainty and traditional truths in America during the 1960s.

Culture War, Class War is far more than my story, however.

I can say I watched the developments that this book unveils and that I was an avid participant in many of its events . But this is America’s story, America’s untold story. I could not have witnessed all the things that are brought out here, nor could anyone. For much of this was hidden, and that is the first point.

But what is also here is much that many people have seen. But much of it is not remembered. It is discouraged from being thought about, because it is a reality inconvenient to those who orchestrate events. This book reminds us of truths we should not forget.

But when brought to mind, these truths lead to obvious conclusions. This book sheds light on these “inconvenient” but obvious realities of America’s past and present. We begin in the past, the 1950s in America.

For the author’s reading, with elaboration, of this part, click on the link to the audio site above or the audio player below. [Footnote 1]

Politics, Truth, and the Furious Market in Enlightenment Lobotomies

For many the Fifties, with the Cold War as the backdrop, was a time of confusion. C. The traditional

bellwethers for morality and behavior had been undermined from several fronts. Honesty and truth had been–since the McCarthy era of the early 50s–shaky, uncertain, and vulnerable. With the rise of the power of huge corporations during this period, and with competition and profit rapidly eroding all values and making truth the servant of the (always hidden) agenda, truth and honesty were the first of life’s pillars to be invaded and occupied. While it was gradual, secretive, and so went largely undetected, some astute observers were not fooled and even tried to warn the nation.

Books were written in the 50s about the changing values influenced or directly the result of the amassing of power in these huge corporations. These exposes increased in number during the early 60s: Organization Man (1956) by William Whyte; David Riesman’s The Lonely Crowd (1950); C. Wright Mill’s trilogy on power–The New Men of Power (1946), White Collar (1951), and The Power Elite (1956), along with his obviously relevant Character and Social Structure (1953). Books like Erich Fromm’s The Sane Society (1955) and Presthus’s The Organizational Society (1963) made arguably more serious criticisms that the psychological map of Americans were being negatively affected in important areas.

The most significant warning came from the President of the United States who had presided over this post World War Two rise of corporations. Dwight D. Eisenhower, in his final televised address to the nation before leaving office, warned against the power and influence of the military-industrial complex. [Footnote 2]

Prophetic and prescient, his words–often quoted over the decades since–included “we must guard against the acquisition of unwarranted influence, whether sought or unsought, by the military-industrial complex….”

With Americans caught between opposing evils of confusion and anomy, on one side, and being assimilated by corporate culture (“resistance is futile”), on the other, many suffered through, or clung to traditional ways, especially the elderly, and ignored the assaults on the credibility of these institutions over time.

There was an astounding era of unity and enthusiasm during the Kennedy years, where corporate culture was subsumed under lofty ideals, which included both technological advance–and thus

harnessed corporate energy in a positive direction–and social and intercultural advance, as for example with the Peace Corps. Fragmentation and anomy were forgotten as America believed it was involved in higher causes emanating out of the times that seemed powerful enough to propel everyone into the future with all the fragmentation following and somehow working itself out eventually. 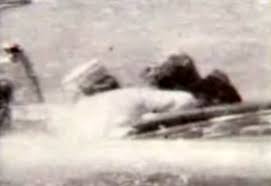 The dream is over.

When John F. Kennedy was murdered, arguably by the Mafia but either in collusion or under pressure from powers aligned with that military-industrial complex, of which Eisenhower spoke, the floor fell out from beneath aspiring Americans, leaving them empty, directionless, and therefore vulnerable.

Almost immediately after JFK’s murder, Johnson escalated the war and funding for it. America had its first coup; its first massive cover-up and Big Lie.

Over the next forty-six years, with Republicans taking over soon enough and holding onto Executive Power for all but seventeen years, including Johnson’s five years, the tendencies that began in the Fifties involving the gathering of power into fewer and fewer hands, and the use of that power to influence the beliefs, ideals, and even psychology of the masses, increased and became more severe, pervasive, and threatening up to the point of the outright lunacy and obvious deceptions and manipulations that were evident under George W. Bush. Only at that point, with year after year throwing up scandals, corruptions, misgovernment, several stolen Presidential elections, an unnecessary war, runaway deficits, and most significantly, right from the start, another massive transfer of wealth upward to benefit that small elite and increase their power, were Americans finally beginning to open their eyes to the ways they’d been lied to, used, and robbed by the rich and powerful. It took all that, which played out on the media nightly, year after year, with no recourse even for impeachment because of an ill-timed agreement

between the parties about impeachment that had come out of the debacle of the impeachment attempt on Clinton, to create the cracks in the Matrix, or web of Big Lies built up over nearly 50 years. So that finally an authentic man, a man not of the powerful elite, could win the Presidency handily.

The Black Angels music vid: “You in Colour”
No better statement I know of the birth of modern era in 50s-70s

However, before that last event and over the course of those decades Americans saw essentially the rise of a one-party government, a consolidation of the mass media and its subservience, along with the government’s, to that same small group of people and powers, aligned with the huge corporations and serving their interests for profits and for enrichment of the already filthy rich. With most powers and most institutions, including education and publishing, orchestrated to the ends of a mighty few, there existed a pervasive–however very slick and clever–propaganda and cover-up apparatus constantly at work to fill or bend the minds of Americans along lines not in their interests, but rather those of these hidden powers with their corporate and political fronts.

So pervasive and overwhelming was this effort at mind control and misinformation that it mirrored that of the Soviet Union during the Cold War.

Since it provided no comfort, motivating people through the strategic use of terror and the incitement to hatred, it left that aspect wanting and many people–pushed to desperation and irrationality because of the continual terror and hatred campaigns–ran to traditional religions or clung feverishly to any one of the many alternatives offering easy one-stop full-service truth–whether evangelical, political, ideological, or traditional.

2. Eisenhower gave this address only days before his term was to end. The significance of Eisenhower waiting till he was about to leave office to inform the American public just hit me.

We wonder what has happened to Obama since he took the presidency. We wonder what happened to his ideals, his promises, the change he promised. We suspect something dire, for we have watched as Democratic president after Democratic president—especially Clinton, to some extent Carter—changed once they assumed the presidency. Jesse Ventura, speaking on CNN recently, said Obama was no doubt “taken out to the woodshed.” It just never occurred to me till now that those unseen hands might have even been there in 1961, too.

Certainly the forces of the military-industrial complex weren’t as powerful, bloated with power, as they are now. Still, why else would Eisenhower not speak about this until his term was just about over? If he didn’t feel pressured (threatened?) previously, why would he not have been making this an important issue? It was, after all, the summary statement, culminating viewpoint, of his eight years.

Also, if he did feel pressured (threatened?) not to reveal or let some truth be known during his time in office, yet felt it was something of extreme, even dire, importance, might he not have “risked” it at the very end, for the good of the country?…feeling that his conscience needed to relieved as he saw the end of his influence and of his own life in sight (he had gone through several health crises during his term that could have been terminal), that his legacy would be completely blackened, his influence totally skewed in a way he did not wish if he did not “spill the beans” at some point…the end being his last chance to come clean and the only time, perhaps, that he could feel he could go through with it without immediate personal, or some other kind we don’t know of, repercussions? There may be much more to this warning to the nation than had previously been brought out.

Activist, psychotherapist, pre- and perinatal psychologist, author, and environmentalist. I seek to inspire others to our deeper, more natural consciousness, to a primal, more delightful spirituality, and to taking up the cause of saving life on this planet, as motivated by love.
View all posts by sillymickel →
This entry was posted in 60s, History, Politics and tagged 1950s, America, class, cold, culture, Eisenhower, Fifties, globalrevolution, Kennedy, Lies, McCarthy, military-industrial complex, occupy, occupywallstreet, truth, war, warning. Bookmark the permalink.