Authenticity’s Last Stand: Will the Internet Fend Off the Zombie Apocalypse? … The King’s Gotta Die Sometime! 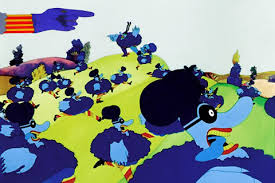 The King’s Gotta Die Sometime! Prospects and Dangers in the Post-WWII-Generation World

However much we cannot know the future, and despite the seeds of WWII Generation values left incubating in the minds of Eighties and Fifties Generation members and emerging under tea-bag hats, we can hope that the vision of “Pleasantville” will eventually hold out.

People fight harder to keep what they have…for good things that they’ve experienced.

Just as in the movie when after everyone has experienced color there is no semblance of a wish to return to a black-and-white world, so also we might hope that as our society turns more and more away from war-making, selfishness, race- and sexism, ecological destruction, and all the other WWII Generation evils left behind, and turns more and more toward economic prosperity, peace-keeping, loving our children and having honest relationships, and the reclaiming of our natural environment and ecological balance, there will be fewer and fewer who wish to turn back the times to the unreal black-and-white world of the “Blue Meanies.”

We see evidence of this in both the election of Obama and the high popular ratings for him since in office. Earlier we observed it in the great support for Clinton even during the assassination attempt on his character.

The approval ratings of both of these Sixties-side-of-the-Culture-War Presidents certainly is not comprised only of Baby-Boomers. Sixties Generation values are infectious because they offer so much hope. African-Americans of all ages supported Clinton overwhelmingly; of course they support Obama. We can certainly see that our black population would not wish a return to the black-and-white world that included discrimination and violence against them.

Women of all ages, for the same reasons, would not be expected to wish a return to a less individualistic status, to a subservient state. And the young will always be idealistic if they are shown any ideals, which is what we can expect the Sixties Generation to be doing, as they continue taking their seats in the Wise Elders section of the parliament of sociocultural creation.

We have seen examples of this change all around us. In fact the current frenzied attack from the Right can be seen as a desperate last ditch battle in a war they will inevitably lose. That is the good news.

How bad the aftermath, The devastation left behind

The bad news is that, similar to the way the Republicans cleaned out the Treasury and left huge deficits and several wars on the desk of the incoming Democratic administration, thus hobbling it before it began, we have no idea how great will be the destruction left behind from these culture waging, albeit waning, authoritarians in the current context.

With their gains in stealing from all classes of society below them in their last dying clingings of a dying old guard, a king who simply won’t die, they are heavy with gold. They have the means to buy much more influence than their numbers.

Their power is magnified

The multitudes are growing in size against them, but with their wealth and with the technology and science available now multiplying further their abilities, their capacity to control the minds of much of the population is magnified beyond anything previously and beyond anyone’s abilities to calculate or foresee.

So despite the trends toward a natural evolution like we have seen in the past, we might witness a strange aberration-—a zombie apocalypse created out of the

thinking of a time long gone comprised of sick ghostly fantasies of a black-and-white golden age that never was. Such things have happened before; cultures have indeed stagnated for hundreds and even thousands of years; the Middle Age is one such example of stagnation beneath an oppressive deathly authority that would never renew. Still, despite the scientific and technological monkey wrenches that might permanently upset a natural order of progression, it is more likely that things will work out as they have most of the time than that we will see an aberrant development. There is, after all, at least as much technology and science catalyzing progressive change as is not.

And the evidence for a natural development is there for all with eyes to see. With so much change needed, it is easy to forget how much has changed for the positive since the Sixties. Still, with no inclination to see it, no amount of listing of the evidence will bring them into view. 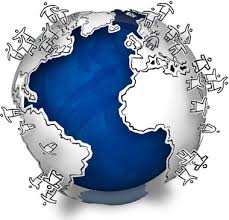 What might be helpful, though, is to note some other analogies from the movie “Pleasantville” which can provide insight as to what may be on the horizon or at least be considered food for speculation:

It takes a village; we are a global village.

Whereas the black-and-white Pleasantville ends at the town’s borders and turns round again to the center of town,  the post-color Pleasantville roads continue going, connecting Pleasantville with the rest of the world. Thus, with color and by inference imagination and thinking for oneself, Pleasantville has become part of a larger world, one in which Pleasantville citizens can participate and in which they can travel and take up residence. This represents the global village, the coming together of the interests of all nations–the emerging “global economy.”

We have what really brings down tyrants – The power of individuals is also magnified by technology.

But perhaps most of all this connection to a larger world represents those factors of modern telecommunications and travel that have made the world open to the eyes of all,  which is the real reason the Iron Curtain fell, the real reason apartheid was overthrown, the real reason democratic revolution is coming to the Middle East and may yet be causative in bringing democracy to places like China and Iran, despite their oppressive propped-up elder-archies, their kings who will not die, their frozen non-renewing social processes.

The W finally overthrown by the WWW?

And the most potent analogy of all: the World Wide Web, bringing together all peoples of the world into a collective consciousness sharing ideas and together shaping a world, not just a neighborhood, with true democratization of information, uncontrollable by any wealthy elite of any country or any generation.

Finally, the image at the end of “Pleasantville” is the most apt for what we may next expect: The only thing we know for sure is that it will be different.

Coming Up: The Rise and Fall of “Obvious Truths”–How The Big Lie Continued; The Fifty-Year Invisible Family and Community That Surrounded All Americans and Affected Every Aspect of Their Lives Including, and Intentionally, the Basic Components of One’s Personality, and the Erosion of Reason, Soul, and Independent Thought or Action.