Posted on September 3, 2011 by sillymickel

Comedic Monologue with a Twist 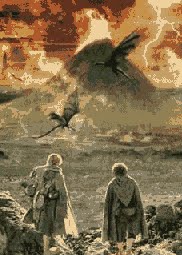 I wish to finish this book on a philosophical note. It starts as comedy, which may not either be a bad idea right now after what we have seen together in previous chapters.

It seems to me that since this exposition picks up, from here, and ventures into the even more dire, more intense—albeit fruitful and imperative—apprehension of our environmental debacle, this is a good time to step back, to contemplate and assimilate, and to the extent one can, be buoyed up, refreshed, and re-created before the necessary trek into the heart of this darkness. You might consider this the hobbit’s interlude in Elf Kingdom before taking up again the quest, continuing through the devastated land of Mordor to its center, to Mount Doom, where exists the only true brightness in the bleak expanse, the only hope.

I’m not Auto Salesman, but I do know him.

This is Auto Salesman’s story. It is he talking. Lest one be confused, this is not me talking. I am not an auto salesman and don’t know the life that he describes for himself.

But I know of it, very well. I was brought up in a very much working class family. I know the class consciousness that auto salesman describes, having it everywhere around me as a child and adolescent…as brothers, father, friends, teachers, coworkers. I also went to a semi-ivy league college attended by many well-to-do students. And I have been a student or instructor at other such educational institutions in my life. I feel I have a little something to say about class differences and perceptions.

Still, this is Auto Salesman’s story, as I said. It came through me from god only knows where. I listen to it and read it with ever more understanding that I did not have when I spoke it a couple years ago. I often perceive it as a stranger would. This is the creation that I feel is the most alien thing that I have ever done, even more a distinct character and different from me than the fawnish character in “Thank You, George W. Bush.”

Not that I am at all unhappy that my muse chose to send it out to the world through me. I thoroughly enjoyed and still enjoy the entire bizarre yet philosophical world this monologue opens to us.

Time for the “eagle’s view”

Still, you be the judge. I can not know very well how others really take this. But I believe it is a powerful understanding, in the end, of the inner worlds that are in play in our national and world dramas at the moment and provides rare philosophical perspective on it all.

Anyway, what this is specifically is a very funny monologue in audio form with the bulk of it transcribed here as well.

The character speaking is an auto salesman. The invisible non-speaking other, a Mister Boehner by name, is a well-to-do man who is there to buy a car. Lest there be any misunderstanding the fact that he was given the name of the current Republican Speaker of the House has only one significance: I see the Speaker as a despicable representative and voice of the filthy rich. I do not mean to insinuate the Speaker’s actual life is in any way like that portrayed for the rich man or is even so by analogy. I am aware that in fact the Speaker’s life is quite different from the one depicted. However, it seems fitting that since Mister Boehner represents the moneyed elite in Congress his name should point to the wealthy here as well.

This monologue is a bit risqué at times, so be forewarned. However, it is not more risqué than you’d hear on cable TV. The well-to-do patron, Mister Boehner, is constantly teased, and sexual innuendos are used. But this monologue is more than just sexual banter.

In spite of ourselves…

In fact, the monologue uncovers more and more of the character. And despite one’s initial reaction to his crudeness—which could be revulsion, and even if that you can’t help laughing at him despite yourself—the listener is forced to have warmer feelings at times, and then more often. This puts one in a position of trying to unravel one’s various feelings about this working class crude person and the “rich” people that are described.

This reading is continually funny and becomes more philosophical toward the end and even a bit poignant. Overall it portrays class or people as complex, and the entire thing could be anyone’s Rohrshack Test, as there may be as many reactions to these people as there are listeners. As the dialog unfolds the auto salesman discloses and reveals increasingly more of himself.

The climax is when he tells a story about his boss’s life that moseys into allegory. In that way, the story reflects meaning back into the relationship at the car lot. The auto salesman’s strange push-pull dialog with the rich customer takes on a deeper meaning. The listener may not know what to do with the feelings evoked…may initially label the man as crude and no-class and later come to see a side behind the crudeness that looks more and more familiar. Yet there is absolutely no obvious message or bias apparent. How one views the ending is quite unique to each listener.

Activist, psychotherapist, pre- and perinatal psychologist, author, and environmentalist. I seek to inspire others to our deeper, more natural consciousness, to a primal, more delightful spirituality, and to taking up the cause of saving life on this planet, as motivated by love.
View all posts by sillymickel →
This entry was posted in Uncategorized. Bookmark the permalink.